skip to main | skip to sidebar

My nephew Fraser and Karen were married on New Years Eve.  I made a card to celebrate both their marriage and the festive party theme they chose.﻿ 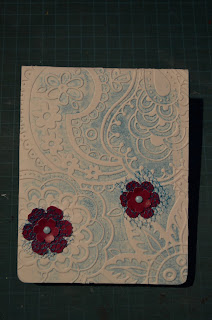 For the front I used a heavy printmaking paper which I cut using the Sizzix pop 'n cut die without any insert.  I used a blue distress ink on the raised edges of an embossing folder﻿ before embossing the raised design on the front half.  I cut two sizes of flowers using the Tim Holtz Tattered Floral Garland die. 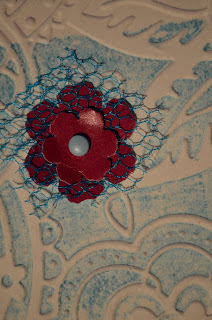 ﻿
I added a piece of blue tulle in between each flower layer and attached them to the the card with small blue brads. The brads get hidden once the inner and outer cards are glued together.﻿
﻿ 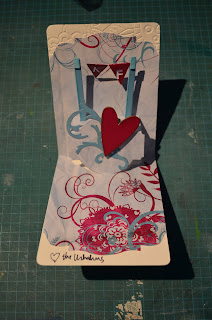 I used digital scrapbookking paper printed onto cardstock.  This I cut with the Sizzix pop 'n cut die with the basic insert.  I added a Tim Holtz Plaque and Postage on the edge die to trim the top and bottom.
﻿ 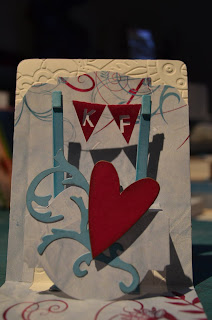 I cut the bigger heart using the Tim Holtz Mini Heart Set and a flourish from the Sizzix Decorative Flourishes Set. I glued the flourish directly to the inner base and added the heart with a foam dot. 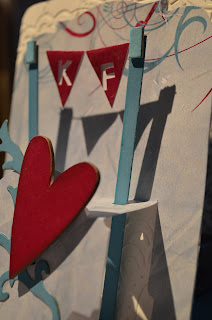 The flag posts were made following the tutorial by Karen Burniston but without using a flagpole die (I kind of made my own). I followed her tutorial and punched slots on the back shelf and inserted the post with a fold at the bottom. I hung fishing line between the poles and drapped pennant flags with intials of the bride and groom.

The wedding was a blast and I hope I caught the party atmosphere.

Janet Lee
Vancouver, BC, Canada
I attended the University of British Columbia, where I managed a campus advertising service. After graduation, I worked as a commercial artist in the silkscreen industry. In the early 1970s, I began working with environmental firms, where my graphic talents were channeled into cartography and illustration. Since 1973, I have operated an environmental consulting company with my husband, where the computer often substitutes for pen and paper. It was here I explored the formal application of computers and was able to break out of the confines of office and graphics applications to experiment with digital technology. Non environmental projects include posters, website design, CD labels, programs, newsletters, slideshows, and other promotion materials, especially for the visual arts and music industry. My signature style incorporates collage and photography using computer software to produce digital collages. Recently, I have been combining these collages and digital printing with traditional art materials.